Not a lot of uplifting news coming out of North Carolina these days.

A few weeks ago, a family-run jewelry store in Asheville, North Carolina – Spicer Greene – invited a lot of trouble by putting up a billboard that advised: “Sometimes, its OK to throw rocks at girls.” 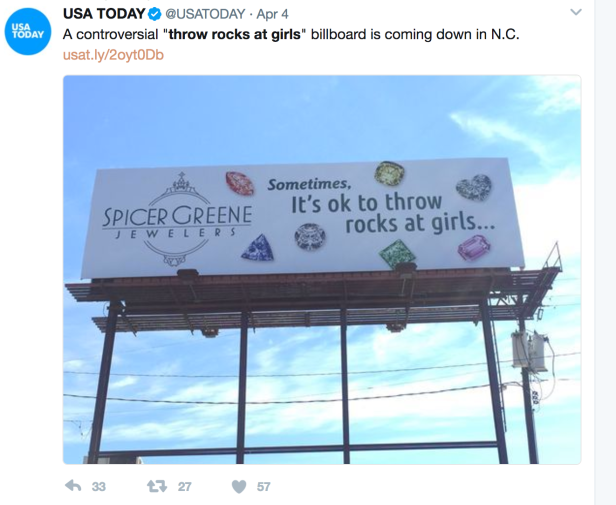 The blowback was swift, strong and well-deserved. After initially apologizing on its Facebook site but continuing to face protests, the company finally took down the sign. The new sign: “Asheville Rocks.” We’ll take that one.

At the time of the controversy, the company’s co-owner said that her 87-year-old grandmother and 60-year-old aunt came up with the idea over Thanksgiving. It was supposed to be “a nostalgic thought of a childhood teaching” and “kinda cute and catchy.” Well, I hope the turkey was not too dry.

But its not clear how much blame Grandma should take for the sign. In 2015, a Calgary business had to take down a sign with the same message after people complained. 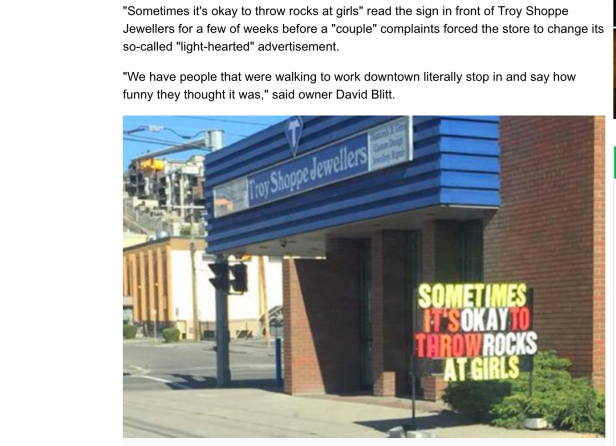 The primary reason for the outcry against the Spicer Greene billboard was, of course, that making light of violence against women – a significant issue in the US and around the world – is not acceptable. It trivializes and perpetuates the problem. Some people predictably blamed the public outcry on political correctness. But they are wrong and callous (if not openly misogynistic), and I won’t waste any more words in this space explaining why.

More generally, marketing of jewelry – even when not condoning violence against women – paints women as shallow, dependent on men, and easily silenced and satisfied by an expensive stone. What more could a woman possibly want out of life, right? And even her friends agree that you – yes, you clueless male looking for an expensive way to showcase your benevolence – should buy her that diamond already.

“Throwing rocks at girls” fits perfectly into this paradigm. While on the topic, this brilliant Atlantic “GIF guide”  on “Women Aroused by Jewelry” takes you through the years of sexist marketing of jewelry.  Its funny and worth the click.