“John, I will give you DC abortion” doesn’t trip off the tongue with quite the same swagger as “Houston, we have a problem” (arguably because that famous phrase was sneakily altered after the fact to give it its wow factor).  But for many D.C. activists, it is something of a rallying cry.

Here’s some background: in April 2011, as part of federal budget negotiations with the White House, John Boehner, then Republican Speaker of the US House of Representatives, was pushing for two anti-abortion measures. The first, a restriction that prevented D.C. from being able to use its own locally-raised funds to provide abortion services in D.C. and the second, limits on federal funds for nonprofit organizations that delivered abortion services nationwide (e.g., Planned Parenthood). Long story short, some last-minute horse-trading led to Obama caving in to Boehner’s demands on the D.C. abortion issue (Boehner agreed to drop his demand to take away Planned Parenthood’s funds). This avoided a federal government shutdown but sold out D.C. residents. Seriously. This crap doesn’t just happen on House of Cards.

You may wonder: why did Boehner and Obama get to bargain over D.C.’s rights to use its own locally-raised funds in the first place? Aren’t states’ rights sacred to many in the U.S.? 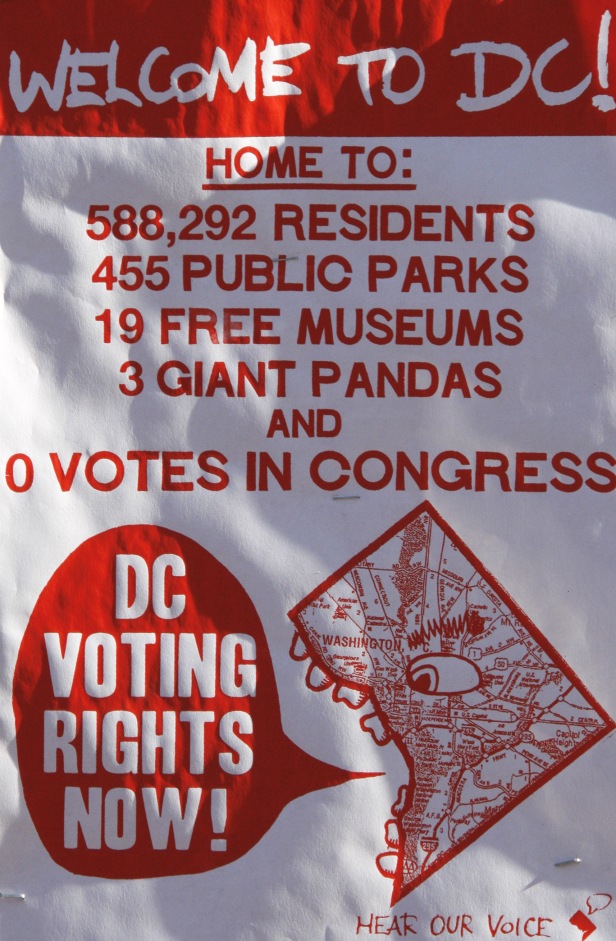 Among other things, the lack of statehood for D.C. means that D.C. budgets have to be approved by Congress and Congress has significant authority over D.C.’s local laws and voter-approved measures. For instance, on the specific issue of whether D.C. can use its own locally-raised revenues to provide abortion services to its residents, Congress has gone back and forth, prohibiting it between 1988 and 1993, lifting the restriction in 1993 and 1994, reinstating the ban in 1995, lifting it again in 2009, and then once again reimposing the ban in 2011.

Your head spinning yet?

The 2011 shove under the anti-abortion motorcade left Josh Burch, a D.C. resident, outraged. He had always been aware of the D.C. Statehood issue, but as the father of a very young daughter, the issue now felt personal. So he began to organize. As he tells the story (and now I have heard him tell it twice), his very first effort to organize drew only a handful of people. (If you attend one of his events, he will tell you exactly how many people. I now forget the number but it was very small. The kind of very small that would have sent me home and left me wallowing in the company of my Netflix queue for the rest of time). But Josh kept going and eventually co-founded Neighbors United for D.C. Statehood, an organization that advocates for D.C. Statehood through grassroots organizing and outreach to Congress.

Meanwhile, 2017 began with even more meddling by Congress in D.C. affairs. Republicans in Congress moved to permanently prevent D.C. from using its own locally-raised funds on abortions (the previous restrictions were in the form of “riders” on the budget that had to be approved each year), gut D.C. gun laws, and block D.C. from implementing the “Death with Dignity” legislation that would have allowed doctors to prescribe life-ending drugs to terminally ill patients.

The heightened concern about this new burst of federal interference in local affairs led D.C.’s Ward 6 council member Charles Allen to start an initiative called “Hands Off D.C.” To brainstorm with interested D.C. residents about ways to stand up to Congress, Allen proposed a meeting at the Atlas Theater in mid-February.  It was a random Monday night (that should have been cold but was not), but over 700 people showed up.

The Hands Off DC initiative and the D.C. Statehood movement, while distinct, are natural allies. They both want autonomy for D.C. Josh Burch was a speaker at the kick-off Hands Off DC event at Atlas Theater (along with other D.C. activists). Two nights ago, Josh Burch and other local activists led a Hands Off D.C. workshop on Congressional advocacy at a D.C. public library (more on that in an upcoming post).

So why might you want to participate in this cause?

So what can you do?