If you have not seen this photograph yet (and you probably have), it could just make you smile. 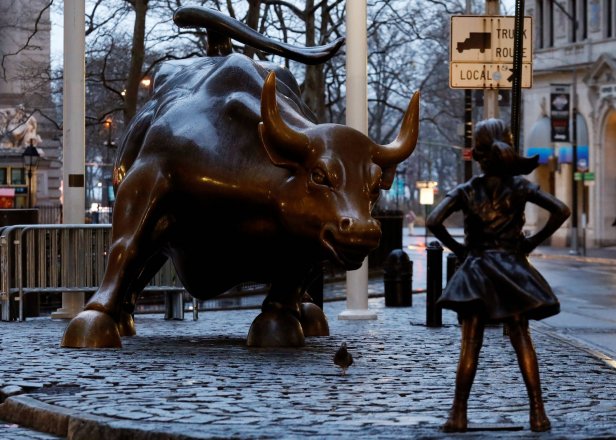 Business Insider reports that “The world’s third-largest asset manager installed a bronze statue of a defiant girl in front of Wall Street’s iconic charging bull statue on Tuesday morning as part of its new campaign to pressure companies to add more women to their boards.”

The LA Times reports that the “Fearless Girl” was placed in that location overnight on Monday by Boston-based index fund giant State Street Global Advisors (SSGA), in part, as a  “stunt to draw attention to.. the anniversary of the launch of an exchange-traded fund that tracks companies that have higher levels of gender diversity in its leadership.” The ticker for the SSGA “Gender Diversity Index” exchange-traded fund is SHE.

SSGA announced yesterday that it would put pressure on large companies to appoint more women on their boards and would begin by targeting firms that do not yet have any female directors. As motivation for its initiative, SSGA cited an MSCI study that concluded that “companies with strong female leadership generated a return on equity of 10.1 percent per year versus 7.4 percent for those without a critical mass of women at the top.” For what its worth, the MSCI study “does not posit a causal link between women in leadership positions and corporate performance.” In other words, the study does not claim to show why companies with stronger female leadership might fare better, but simply reports that such a pattern exists. But still, diversity is important for its own sake, and SSGA reports that “one out of every four Russell 3000 companies do not have even one woman on their board, and nearly 60 percent have fewer than 15 percent of their boards comprising women directors.”

Whatever the financial motivation (and yeah, it’s definitely a gimmick), Fearless Girl has been getting attention all day. Gail Collins of the NYT called it a tribute to “all the people who resisted by staying in place.” That is certainly more sentimental than my own reaction to it, but I did love the picture of the little superhero posing next to her bronze counterpart.

Perhaps you wondered how a statue can show up and be allowed to remain in such a public space?  According to the LA Times, the firm has a permit for the statue to remain in its current location for a week and is trying to extend it to a month.